The Canadian Pacific Railway Company had an integral role in the populating of the Prairie West. Its vibrant history shaped our country and encouraged settlement and agriculture on the prairies. The slogan "from coast to coast" eventually came true as the Canadian Pacific Railway accomplished the feat of building a railway of over 3200 kilometers through shield, forests, and mountains, swamps, and bogs, from Nova Scotia to Craigellachie.

Incorporated on February 16th 1881, the Canadian Pacific Railway Company's aim was to form a link between Canada's populated centres and to increase potential for development in the prairie west. The Canadian Pacific Railway "was formed to physically unite Canada and Canadians from coast to coast" ("Our History", n.d.). In 1867, Canada's Confederation united the four eastern provinces of Ontario, Quebec, Nova Scotia and New Brunswick. As part of Confederation, Nova Scotia and New Brunswick were promised a railway to link them to Quebec and Ontario which were central at this time. In 1870 Manitoba joined Confederation and in 1871 British Columbia joined on condition that the transcontinental railroad be built within ten years to link eastern Canada to the west.

The Canadian Pacific Railway was completed by 1889 (including international routes to Maine - the CPR line was coast to coast in Canada by 1885); this was an amazing feat. Throughout that time the company had expanded to include other businesses including steamships on the Great Lakes (1883), chartered ships on the Pacific Ocean (1886), and paddle wheelers in B.C. (1893) and the Atlantic Ocean (1901) ("Our History", n.d.). The Canadian Pacific Railway Company was also very involved in the hotel and tourism industry; this began as early as 1886. Their contribution to the building of a nation was further noticeable by their efforts to erect telegraph lines along the main transcontinental railway line.

*For more information on the earliest beginnings of the C.P.R. please browse: "Origin of the Canadian Pacific Railway" by Howard Angus Kennedy, published in 1928.

In addition to "free land" distributed by the Dominion to newcomers, the Canadian Pacific Railway expanded their enterprise to promote land settlement and land sales in the Canadian West in 1881.

The Dominion Lands Survey system was developed by the Canadian government for prairie settlement. The checker-board survey system included townships composed of 36 sections that were sub-divided into quarter sections of 160 acres. The homestead was essentially a quarter section of land distributed to immigrants from Europe, the United States, and people from Eastern Canada - all newcomers to the West.

Railways were granted odd-numbered sections of the 36 section township grid, excluding land reserved for schools: sections 11 and 29 (see Fig. 1). These railway land grants were more formally referred to as railway land subsidies. The land subsidies were contradictory to the land distributed by the Crown; in that "the grants to the railways removed vast areas from the reach of the homesteader and forced the farmer to pay tribute to the corporation"; however, the "building of the railways increased the value of settler’s acres sufficiently to compensate for the few extra dollars which he paid for them" (Hedges). From Atlas of Alberta Railways

Scenes along the line of the Canadian Pacific Railway 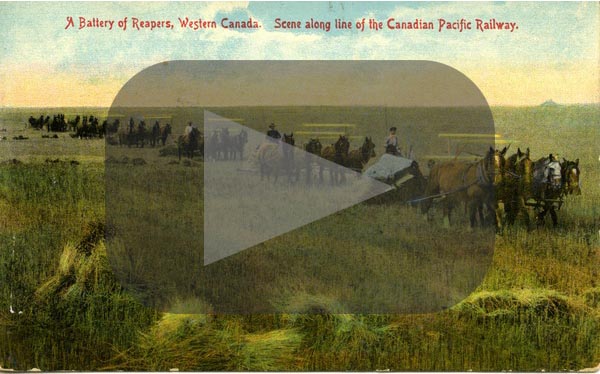 To promote land sales, the Canadian Pacific Railway developed an intensive propaganda campaign targeting prospective settlers originating from the United States of America, Europe and other areas of Canada, especially eastern Canada. The following exhibition represents only a sample of the propaganda pamphlets used to draw potential settlers to the West. Notice the appealing images and catchy choice of words designed to inspire individuals, families, and communities to relocate to the Prairies over one hundred years ago.

1. Some startling facts relating to the Canadian Pacific railway and the north-west lands; 1888

12. A Handbook of Information Regarding Alberta, Saskatchewan, and Manitoba; 1917

13. A Handbook of Information Regarding the Prairie Provinces of Canada; 1921

The following historic maps of Western Canada dating back to 1880 were published by the Canadian Pacific Railway Company and provide a geographical representation of the scope of their railway enterprise.

1. Map of Manitoba, Keewatin, British Columbia, & North West Territory shewing the country to be traversed by the Canadian Pacific Railway; 1880

2. Manitoba and the Northwest Territories of Canada showing the lines and land grants of the Canadian Pacific Railway; 1888

3. Map of Western Canada; Map of the Canadian Pacific Railway and its Connections; 1890/1892 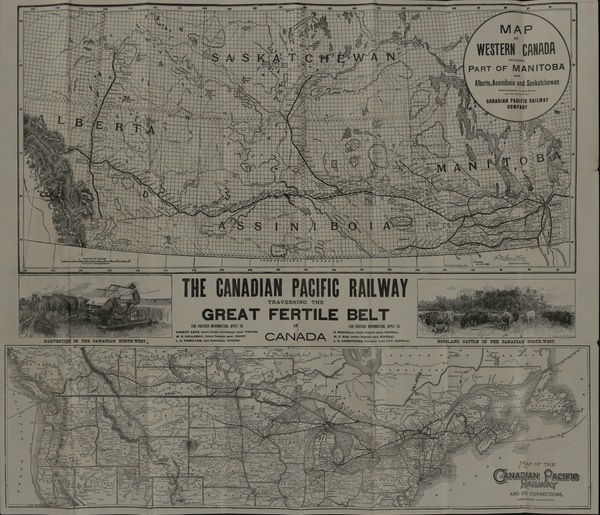 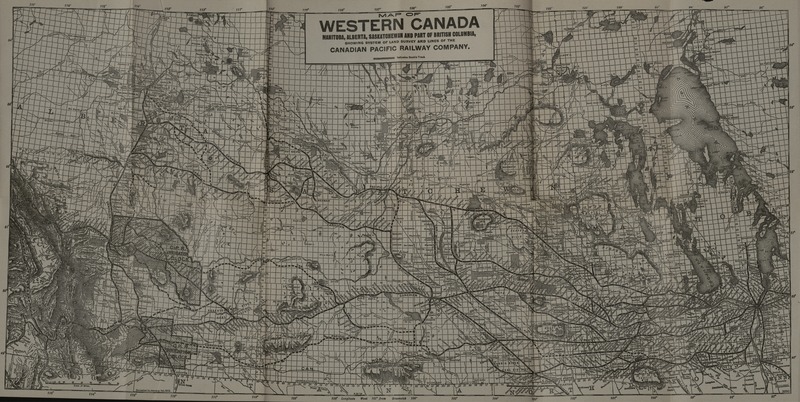